In a newly-published review of “Kaleidoscope” Antony Bailey of Country Music International Magazine has this to say:  ” …This eclectic record takes influence from a diverse range of musical genres and transcends a variety of styles. After its initial release in 2021 with Belltown Records and Wilderside Productions the record is still receiving many appraisals from country listeners stationed around the world…Be sure to download this E.P to the playlist as it is sure to add a bit more spice and flavour to the musical palette.”  Check out the full review… click HERE

So many great reviews are pouring in!  Music Morsels says:  “The songwriting is as interesting a mosaic as Hilary’s voice itself with the often lush vibes sprinkled in with just the right doses of edginess and sporadic forays into R&Bish throbs. The lyrics are heartfelt and often topical, completing this delicious feast.”

Check them all out in REVIEWS

Kaleidoscope is an exciting and eclectic album that delights the listener with four songs that are the product of a songwriting collaboration project between Hilary Scott (Hilary Renee Helm) and other high-caliber talent; plus the international-award-winning song Hilary wrote for her husband. Kaleidoscope showcases Hilary Scott’s distinctive voice (described by Italian producer Euro Ferrari as “absolutely extraordinary in its emotional greatness”), Matthew Wilder’s exceptional production talent, and the genius of the songwriters: Hilary Scott, Matthew Wilder, and legends Angela Kaset (“Something In Red”) and John Goodwin (co-writer of songs for the movie Crazy Heart).  For more information:  Kaleidoscope

Hobo On The Tracks (UK):  “Kaleidoscope is a sultry, soothing, incredibly sexy, exciting and eclectic album from Hilary Scott.  Beautifully produced  by Matthew Wilder (who also adds into the mix backing vocals, guitars, keys and drum programming) the songs here soar and swoop, fly high and produce a powerful blend of Americana…….Mind’s blown – what a great EP this is…”

JP’s Music Blog:  “… beginning with the stellar, laid-back Americana/pop groove of “Just A Shame,” as you will easily fall in love with Hilary Scott’s warming vocals.”

Ian D. Hall, Liverpool Sound and Vision:  “A set of songs that are pleasing, controlled and adventurous, Hilary Scott has offered another side to the tale of her life, and it is bountiful.”

Stefan Meekers, Keys and Chords:  “With a fresh approach, she introduces us to that eclectic musical landscape. And her sultry voice intonation is the common thread through the songs. Great stuff..!”

Chris Spector, Midwest Record:  “Scott shows she adapts well to any environment. These tracks could easily fit onto any contemporary, youthful play list.”

The Grateful Web posts:  “The eclectic nature of what she writes, and her willingness to explore diverse genres and not lock herself into one style is what sets Hilary Scott apart. Kaleidoscope is the perfect showcase for these talents.”

Almost Home Single  (a track from the new Kaleidoscope album)

Almost Home (2020 Remix, Remaster) was #9 in the NACC’s Top Singles list in its May 18th update to its charts for both streams and downloads by reporting stations! 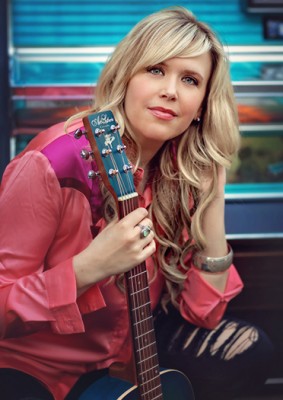 “Hilary Scott with one L” has received rave reviews in national and international publications and won multiple awards for her aurally lush and lyrically significant music. Her voice has been described as “absolutely extraordinary in its emotional greatness” (producer Euro Ferrari).  In addition to her beautiful voice, Hilary Scott is an accomplished singer-songwriter and multi-instrumentalist (piano/keys, guitar and violin).  Joe Montague of Riveting Riffs sums it up, when he writes: “Hilary Scott is a secret that has been kept from too many for far too long.

“Not to be confused with the two “L” Hillary Scott from Lady Antebellum, Hilary Scott has carved her own name into today’s Americana scene with a breathlessly intoxicating voice and a knack for creating catchy, emotional, and subtly edgy songs.”  Mark E Waterbury, Music Morsels

A prolific songwriter, Hilary Scott has released a dozen albums.  She has been featured in No Depression, Country Music News International, Maverick Magazine, Billboard and more.  And as Aarik Danielsen of the Columbia Daily Tribune notes, “Amid a mélange of time zones, international date lines, languages and suitcases, Scott has earned the trust of her audiences through the power of her soulful voice…”

After the pandemic of 2020 affected the work of so many musicians including Scott herself, 2021 sees the release of a new album, Kaleidoscope, a work Scott describes as “a record that gathers together and honors the various colors of an eclectic musical landscape of different styles, genres and snapshots in time.” Kaleidoscope tracks include four co-written songs (produced in a songwriting project with three other songwriters including Matthew Wilder and songwriting legends Angela Kaset and John Goodwin). The tracks on this album range in style from movie soundtrack ballad to dance club surprise, and one song that won the International section of the Festival Degli Autori songwriting competition in Sanremo, Italy.  Kaleidoscope will be released on June 25th.

To all of our fans..stay safe!

September 10, 2022
Wonderful review of Kaleidoscope by Country Music News International Magazine’s Antony Bailey Track Listing:   1.  Just A Shame; 2.  Almost Home; 3. Too Much Is Not Enough; 4. And Just; 5: Free Country REVIEW “Hilary Scott wrote an award-winning single for her husband titled ‘Kaleidoscope’ and has since released an...

END_OF_DOCUMENT_TOKEN_TO_BE_REPLACED

September 9, 2022
Hilary Scott and AJ Gennaro will be performing on the Wine Stage at Oysterfest on October 1st from noon to 1:30 PM.  The show is free to the public with your entry to the festival.  The festival is held at Sanderson Field Airport at West Sanderson Way, Shelton, WA.

December 21, 2021
Hilary Scott is included in a 60-minute special Holiday Celebration of a dozen of the Inland Northwest’s most talented musicians performing beloved Christmas classics and beautiful new originals. The special will air three times on KSPS across the Inland Northwest between now and Christmas. The dates are:  Tuesday 12/21 at...

END_OF_DOCUMENT_TOKEN_TO_BE_REPLACED

November 15, 2021
In Week 20, Powderfinger Promotions reports that Kaleidoscope has been added by 118 stations, with 11 of these stations having Kaleidoscope in Heavy or Medium rotation.  Also, at the time of the report, Kaleidoscope was #215 on the AMA album chart.  AMA reports Americana radio airplay. If you would like...

END_OF_DOCUMENT_TOKEN_TO_BE_REPLACED

October 29, 2021
Hilary Scott’s KSPS Inland Sessions episode airs this Monday night, November 1st at 7:30 PM Pacific Time!!!!  The show will be broadcast and streamed live to viewers in the KSPS broadcast area.  For viewers all over the world – you will be able to view the show anytime starting November...