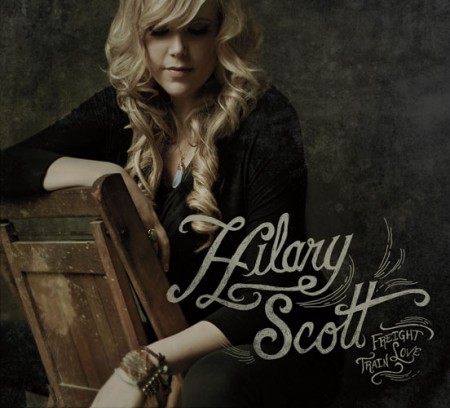 “Scott has a sharp pen, a smoking voice and more soul than a white girl sounding like a white girl should have.”   Chris Spector, Midwest Record

“Sultry”  “…on a cold, rainy afternoon I decided to pop the disc into my car’s CD changer for the commute home and it was as if the clouds parted for a ray of sunshine.”    “We should be so lucky to know Hilary Scott, the one with one “L”, and hear her beautiful, newly released album Freight Train Love…”   Jay Minkin—No Depression

“I am a believer”…“Look out Alison Kraus, you have competition”   Bob Everhart – Country Music News International

”..very powerful performance “…“’If You Don’t Love Me’…is good enough to be listed in the Musical Collaboration category at the CMA’s“    Paul Collins – Maverick Magazine

Freight Train Love is Hilary Scott’s exciting new album was recorded in Los Angeles at Johnny Lee Schell’s Ultratone Studios.  The album was produced by Americana artist, Michael ONeill, who also co-wrote several of the songs on the album with Hilary Scott.  Michael ONeill brought in some of the music world’s finest talent, multiple Grammy award winners such as Schell (who played guitar and also did the engineering and mixing), as well as Bob Glaub on bass (Paul McCartney, Linda Rondstadt, Rod Stewart); Tony Braunagel on drums (Bonnie Raitt, Rickie Lee Jones); and Mike Finnigan on keys and organ (Crosby Stills and Nash, Leonard Cohen).  Additional percussion was provided by Scott, Schell, ONeill and Aj Gennaro.  Julie Delgado (who has worked with Sting) sings backup vocals for the title track, “Freight Train Love”.  Hilary Scott wrote three of the songs on the album and collaborated with Michael ONeill on four.  Cover tracks include two songs by Kevin Fisher (who sings a duet with Scott on one of his songs) and “Lotta Love” by Neil Young.  Bob Glaub plays bass on “Lotta Love” as he did for Nicolette Larson’s big hit years ago.

Freight Train Love can be ordered from the Hilary Scott Store

And more great comments from reviewers

“Blessed with a powerful voice and equally at home on guitar, keyboards or violin Hilary is a talented lady and she writes good songs, too, seven of the ten on this album are from her pen, including the title track which starts things off. “Freight Train Love” [title track] has a yearning, soulful R&B feel to it…Hilary really comes alive on the duet with Nashville songwriter Kevin Fisher on “If You Don’t Love Me”. This track is good enough to be listed in the Musical Collaboration category at the CMAs”. – Paul Collins, Maverick Magazine

“Unbelievably Talented!  This CD is full of solid lyrics, a wide vocal range, and melodies that will stick with you for days. Check it out!”      Five star iTunes review by Jayhawk in Colorado