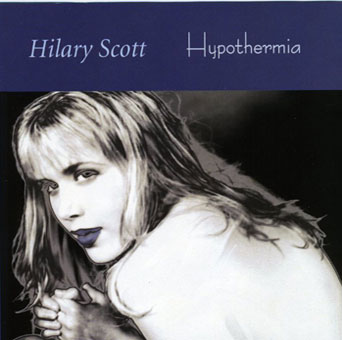 Hypothermia encapsulates some of the artist’s most poignant songwriting with raw, emotionally direct performances.

“Very few artists can put out a record like this, and usually if they do it is only by accident…Scott is stripped down to one voice and one guitar, blurring the lines between dissonance and consonance both aesthetically and emotionally….there is no letting up on this disc, folks….this album is a diary of unprecedented greatness in the world of music….it is pure, resolute, paradoxical, and confusing….it is untainted by effort, or calculation, or goal…..it is young, raw talent accidentally expressed. It is so cold it burns.”

Hilary Scott writes this about “Hypothermia”:

“Listening to Hypothermia takes me back to a time when I had to drive so far to get to a studio I could afford, that I never rescheduled sessions, even when I was ill.  It reminds me that there was once a time when a “productive session” meant getting half of the album finished in four hours, and when recording never-before-attempted versions of songs and declaring them “done” after one take was a common occurrence.

Would these songs sound differently if recorded now?  Of course, and that is precisely why I did not re-record them before releasing them.  Certainly there would be more polish and more maturity to the sound, but perhaps much less sincerity as well.

Mostly these songs remind me of the very real emotions and sometimes fanciful stories that led me to fall in love with songwriting.  Some of these songs are so personal, they may never be performed publicly, and some of these songs have and will appear on other albums as full-band versions.

Folk lovers will probably find that these songs make me more qualified to call myself a “folk” artist.  But that is why I do not call myself anything unless absolutely forced to.

I feel compelled to deal with issues, sometimes of politics, but usually of the heart, and always in writing.  It just so happens I like to put a tune to my thoughts.  So with open ears and open minds, may you find something to appreciate in this album.

My thanks go out to Mike Robertson for inadvertently reminding me that just because a songs seems dated to the artist, that doesn’t mean it isn’t still relevant.

Thank you also to Robert Parks, the original engineer who gave us some great tracks from which the essential honesty and rawness of the album comes.”