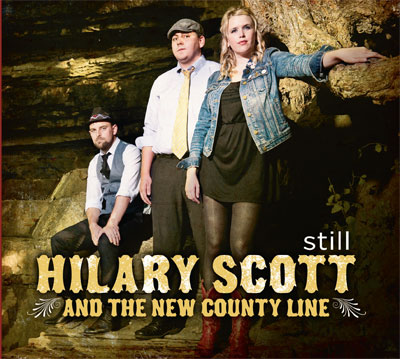 “Hilary Scott and The New County Line’s Still, is a standout album of the year. This is the making of a classic. A stunning record that knows no boundaries…”– Melissa Natasi  – Review You

Still was recorded in St. Louis’ Sawhorse studios – (recently voted best STL studio by the Riverfront Times).   Working with talented engineer Jason MacEntire, band members Scott, Gennaro, and Schilling approached this record with a solid plan and open minds. Experimenting with sounds such as a dropped anvil, stomping on plywood, and recording multi-layer handclaps, the band took their indie-folk sound to a very unique place. Songs on the album range from anthemic, driving, punch-in-the-gut emotional roller-coasters laden with Hammond organ, to bouncy, unexpected three-minute tantalizers that leave you wanting to press “repeat.” Hilary Scott, songwriter and lead vocalist for the band, had the opportunity to play on the same piano on which Ike and Tina recorded their first hit – one of the many cool facets of the process that went into creating Still.

“ Pinning down influences on Hilary Scott and the New County Line is both somewhat difficult as well as fairly straightforward (if you can dig it).  There’s a lot percolating around in there.  Take a dash of this and a little more of that as you like it: Joan Baez, Natalie Merchant, Alison Krauss, Regina Spektor, Tori Amos…if it sounds like cherry picking, that’s because it is, and with good reason, as all these artists and more make their way into Scott’s sound.  Perhaps easier is to hit on some loose genres and let one’s imagination take over, so here goes: pop, country, Americana, gospel, the new Nashville sound, folk, the sound of long car-trips across the American Midwest…you get the picture.  Scott’s voice is strong, and the underpinnings of her music skew towards a personalized sound-collage of various tangents of American pop and neo-Americana of the past few decades.  What’s there is both fresh and familiar.” – Reed Burnham (Review You)

“In only five songs, Hilary Scott and the New County Line, manage to do something that most artists can’t do in a full length album; deliver a completely satisfying listen that transcends categorization and genre…If you had to define their sound it would be [akin] to an indie-pop group with their largely piano driven, atmospheric pieces.  Few pop songs are this lush though, and fewer still would include the use of a Hammond organ.  When all the pieces are added and committed to record, the end result is something that can’t be classified but can certainly be described as amazing.” – Heath Andrews (5 out of 5 stars) (Review You, also writes for Ithaca College, 106VIC)