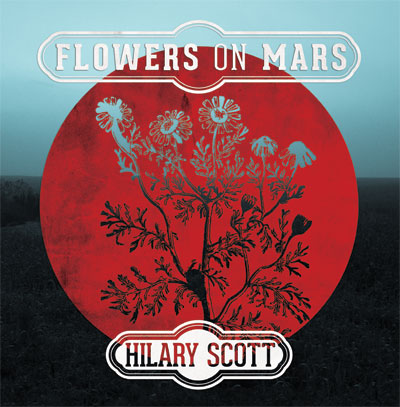 With new record, Hilary Scott is living her dreams

Hilary Scott about her newest release, “Flowers On Mars”:

Dreams are hard to realize, and few understand this better than pop stars. Fleetwood Mac once sang that “Dreams” would drive you mad; Weezer’s Rivers Cuomo found true love “Only in Dreams,” only to find it all “erased” when he awoke; in ethereal fashion, The Cranberries lamented dreams that were “never quite as it seems.”

With her new EP, “Flowers on Mars,” singer-songwriter Hilary Scott has embraced the elusive, making one of her dreams a reality — quite literally. The imagery that drives the title track, and anchors the set as a whole, arrived in Scott’s sleep, prompting a 3 a.m. songwriting session.

“I dreamed about three or four lines of the lyrics, woke up and wrote them down, and composed the rest of the song in about 15 minutes,” she said in a recent email.

In a more intangible sense, the track signifies the way in which she has pursued her greater musical dreams. The phrase “Flowers on Mars” exists as “a symbol of the impossible,” Scott said.

“I think ‘impossible’ is how I once viewed a career in music, and I am constantly surprised that not only am I still pursuing it but still having victories and forward momentum,” she said.

That sense of perpetual motion has been catalyzed by a mixture of Scott’s dogged determination and natural talent. The St. Louis-based artist, who earned fans and friends while living in Columbia for several years, has chased her dreams to the world’s corners, performing throughout Asia and winning honors at an Italian songwriting festival.

Her latest effort represents continued commitment to her vision and a continued expansion of that vision creatively. The EP will be available on hand-numbered and -signed vinyl at a special show this weekend, before a national release in September.

“I started thinking about a cohesive project that would bring together the various things I have done in different places around the world, … and the idea of ‘planting flowers on Mars’ then is just sort of a metaphor for taking my music to new and far-flung places to which I may not have imagined I would be able to go,” Scott said.

Scott’s music has long been a labor of love, but that reality has taken on new meaning in recent years as she gigs and creates with husband AJ Gennaro. Scott often performs with a full band, yet, for logistical reasons, she and Gennaro sometimes tour as a twosome. Working together, they’ve experimented “with the sounds and layers we can accomplish as a duo. … We felt we needed a record that was a reflection of what we do together live,” Scott said.

That intimate interaction is made manifest on “Flowers on Mars” — however, the record is anything but spare or stripped-down. At times, Scott said, the pair achieved a bigger sound than even she expected, and she categorized moments on the album as “more playful than my music has ever been.”

“Flowers on Mars” not only displays the creative exchange between Scott and Gennaro but presents a narrative on love and loss and loving again. Rather than hold the songs back for a later LP, Scott sensed the tracks belonged together and were “screaming to be recorded,” she said. In just four moves, she takes the listener on a journey “from rejection of love, to a cry for understanding and a desire to be forgiven, to confidently pursuing love, to accepting the beauty and complication that is a relationship,” she said.

Similarly, the record allows for big, buoyant moments, as well as intricate, intense sounds. “Get Your Love” features a full-size sound Scott is clearly proud of; the cut weds a twinkling, tinkling toy piano melody to a propulsive drumbeat that leads the song to drink from soulful streams. With its mandolin countermelodies and churning rhythms, “Help” leans to the folk side of pop. The title cut grows from a lovely, lilting intro, boasting a rich hook, which Scott lays over a piano-driven promenade. “Sacrifice” captures an unfettered sound, with Scott moving around syllables with grace and ease, even yodeling, all while the soundtrack swells and culminates in spry, driving rhythms.

All the material is unified by Scott’s vocals, which grow richer and lovelier as time passes. She said she continues “to discover” and “extend” her lower range, a discovery displayed to great effect and delight here. She tamps more soul and character into a single note or run than most, and “Flowers on Mars” is yet another declaration of her ability.

Scott and Co. are pointed toward a British tour in July and more recording, including late-summer sessions at the studio of Johnny Lee Schell, whose credits include work with Bonnie Raitt. Each step brings her closer to realizing the things she has worked for, getting there one song and waking dream at a time.   Read the article on the Columbia Daily Tribune website