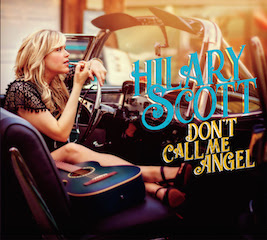 Don’t Call Me Angel is the twelfth album in Hilary Scott’s catalog so she is not a newcomer to the business even if she is not a household name.

It’s a shame that so many things written about Scott include a statement similar to this: Singer-songwriter Hilary Scott (with only one “l”) should not be confused with the “double l’d” Hillary Scott of Lady Antebellum fame but I’m sure she understands why comments like this one are inevitable and necessary.

Any confusion surrounding Scott’s chosen stage name has to be especially galling to her because she took it as a tribute to her late brother who passed away twenty years ago and because she preceded her more well known namesake on the music scene.

Scott’s music has always leaned toward the country side of things but her new album cannot be categorized easily. You can call it a country record, a singer-songwriter affair, or even classify it in the too broadly named Americana genre and you’d be right in every instance.

The songs on Don’t Call Me Angel are pleasant sounding enough and are very well crafted but Scott’s lyrics are the most important reason to listen. The tracks are all about relationships but they’re not drippy love songs. This set is full of tension and emotion.

Except for the cover version of Prince’s “Kiss” the ten track disc is entirely self-written. Scott took his 1986 song and turned it into a “bluesy heartbeat” because she enjoys recreating other people’s work into something that is totally unrecognizable, thereby making it her own.

A great example of the singer’s writing turns up on the CD’s final song, “Here I Am.” She believes being in love is worse than a gambling addiction. “I am a mess. How could I let somebody play with my heart. A gambler can leave the table, walk away if he’s able. But I’m showing more than my cards.”

Does Scott’s outward appearance hide an inner toughness? On “You Will Be Mine” she opens with “I am not nice….I am fire and ice” and on the title track she tells her lover, “Don’t call me angel….I never looked good in white.”

Musically, Scott receives a great support from her crackerjack band that includes her husband, drummer A J Gennaro, and she gets a huge assist from keyboard veteran Mike Finnigan on Hammond B-3 organ. She has a very pleasant voice that reveals an edgy tenderness.

I have to admit to being completely ignorant about the rest of Scott’s extensive output but based on what is offered here her back catalog is very much worth looking into.


By Charlie Ricci at October 12, 2018
Labels: Country, Singer-Songwriters
Check out the full review on Bloggerythyms HERE