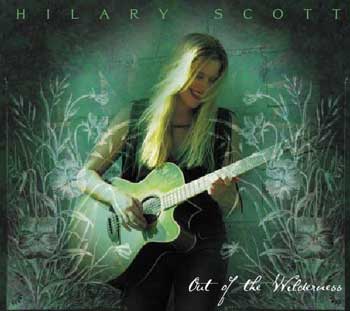 Review by Amy Lotsberg Producer of Collected Sounds
I reviewed Hilary Scott’s CD, The Floating World” back in July of 2003. I remember being very impressed with her not only as a singer with a fabulous voice, but also a musician (playing several instruments on each recording) and as a great songwriter. Especially since she’s pretty young.
Recently I got a package containing the rest of her discography and just wanted to share some really good recordings.

“Come In, Come In: Live” is really nice Live CD. It has a lot of the songs I already like of hers and they’re performed very well.
“People on a Train” has a pretty intense guitar solo.
It’s obvious that Hilary Scott is not just a studio wonder, but can perform in front of a live audience with just as much skill.
She does a lovely cover of Sinead O’Conner’s “Last Day of Our Acquaintance”.

“Hypothermia” is a great collection of fantastic pop-rock songs that deserve more attention than they’re getting.
I especially like “Jezebel”, it’s a hauntingly pretty song.
This one you can only buy on her site

“Out of the Wilderness” is an enhanced CD that includes videos and interviews as well as songs.
I found the interview video particularly charming. It gives us a nice insight into this talented young woman.
“Calls From Springfield” is another highlight esepcially after watching the interview to see what the song is all about.

Out of the Wilderness 2004 / Independent
1. Brave New World
2. People On a Train
3. My Friend
4. Calls From Springfield
5. Sometimes Sun, Sometimes Rain